My second month-long development sprint wraps up today, and I am incredibly happy with the results! I’ll recap some highlights from the release notes but before I do that I’ll do a quick review on the sprint itself.

If you don’t want to read all the things I wrote, you can download the v2020.10 release of Electric Noir here.

How did the sprint go?

Octobers sprint was focused on itteration. Since the last sprint was the first playable demo release, I was able to get a lot of feedback from playtesters and friends. This gave me a lot of great bug fixes and improvements to target for this sprint.

So this sprint I closed out 18 issues this sprint, 11 Bugs 🐛 , 4 Enhancements 💡, 1 Cleanup task 🗑, and 2 Art tasks 🎨. Definitely not as many issues as the previous sprint, but fairly close. I’ve been expecting my velocity to go down a bit as we enter into the holidays here in America and this sprint had a lot of defects in it, which are hard to estimate sometimes.

One thing that I didn’t expect was that by widway through the month I had completed most of the tasks! This left me a lot of room to experiment with some ideas and test out changes and features I’ve been thinking about but not had the time to dive into. Unfortunately this meant that that I finished a bit less work than I would have liked, but I am still incredibly proud of where Electric Noir is at the end of this sprint.

This can be a big problem if you’re like me and you move between a few differnet issues during your work day. Also, since the move to monthly demo releases I’ve been treating breaking main as a more serious offense in my day-to-day workflow. Basically, I wanted to treat main as an “always shippable” version of the game, something I can take and test myself or hand off to a playtester for feedback any time.

So this basically pushed me to using branches and pull requests more frequently, which I use literally every day in my day job life as a programmer, I just hadn’t been as…strict? Disciplined? Whatever, with myself on Electric Noir. I decided to use branches and PRs for any normal or larger task but would still commit to main if a change was minor enough: tweaking AI configs, text/spelling changes, that sort of stuff.

Using branches and PRs had a few nice side-benefits though:

Since I use GitHub issues and milestones for all my task tracking, I could auto-close a bunch of issues with a single PR. And all my PRs show in my milestones, right next to the issues they closed. 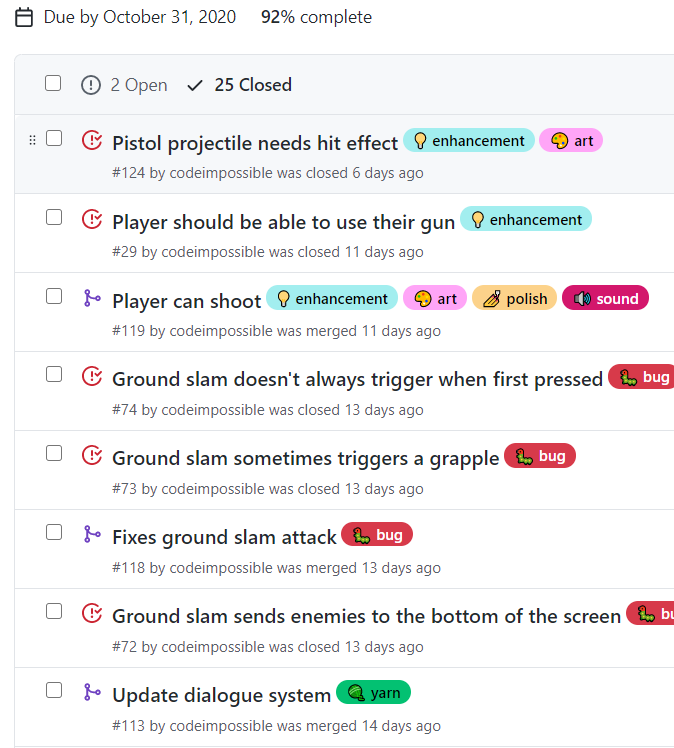 Squashing and merging is amazing, having a commit history that just shows features and fixes being merged in is great

You can download the v2020.10 release of Electric Noir here.