Hey everyone, It’s been a few weeks since the first alpha release and I’ve been wanting to post an update on how the release went, the feedback I’ve gotten so far as well as plans for Alpha 2.

Before any of that I want to give a shout to everyone who played the alpha. Thank you so much for playing and giving your input on how to improve the game. It’s amazing to see how many of you love the game so far and care about making it the best game possible!

So far the feedback has been really really good. I’ll post some screenshots of comments I’ve received and the rest I’ll break down by topic/issue ’cause a lot of folks noticed the same few issues (as you’d expect).

The goals of the alpha were two fold:

Everyone liked the look of the characters, and the environment. I didn’t get any negative feedback on the art style, which is a big relief because other than the actual mechanics, it’s the part of the game I stress over the most.

Also, folks called out the dialogue/lore as something they enjoyed and wanted to know more about. This was unexpected, the section of the game that I released is extremely far into the narrative, but it checked the two goals for the alpha best so I ran with it. Glad it paid off here.

The Not So Good

Ok, time to talk about the things that need to be worked on:

Cutscenes – Pretty much everyone ran into bugs with the cutscenes. Characters didn’t play the right animations, or you could even trigger animations during them, music did or didn’t play, the wrong music played, wouldn’t stop playing, kept playing on the menu, dear god make the music stop playing…

Stamina, Cool-downs, Health, “Mechanic Feedback” – There is a stamina system in EN, there is also a internal cool-down setting for each attack – to prevent spamming. Seems I left this value set too high for pretty much every attack as almost everyone ran into issues where they couldn’t attack even though they had stamina.

Also the UI feedback for healing – when you can heal, how much has healed, when you take damage, isn’t very helpful to the player.

Actual mechanical issues – Thankfully there aren’t a ton of these. Players mentioned that Ode feels too fast when moving, but their attacks freeze them in place when they feel like they should move them forward.

Also none of they players said they enjoyed having to stop while firing the gun. Having the player stop to aim was a conscious design choice on my part, I wanted shooting to be a risk during combat, something the player would have to use tactically, rather than as a crutch during fights.

I already plan to spend more time on the guns ammo, so revisiting the rooted while shooting mechanic is also on the list of stuff for Alpha 2.

This conveniently segues me into the next part which is all about whats on the agenda for Alpha 2.

As for a timeline on the next alpha, I don’t have a release date explicitly set yet, but it’ll drop sometime in September. I’ve already been working on a few of the issues and I’ll be sharing more progress on the Electric Noir twitter account, so if you liked the alpha or what you’ve read here, be sure to give it a follow for more updates!

Also, as promised I’ve included some highlights from the feedback that I got from the last alpha below. I’ve got a lot of exciting work to show off in the next alpha, I can’t wait to release it! 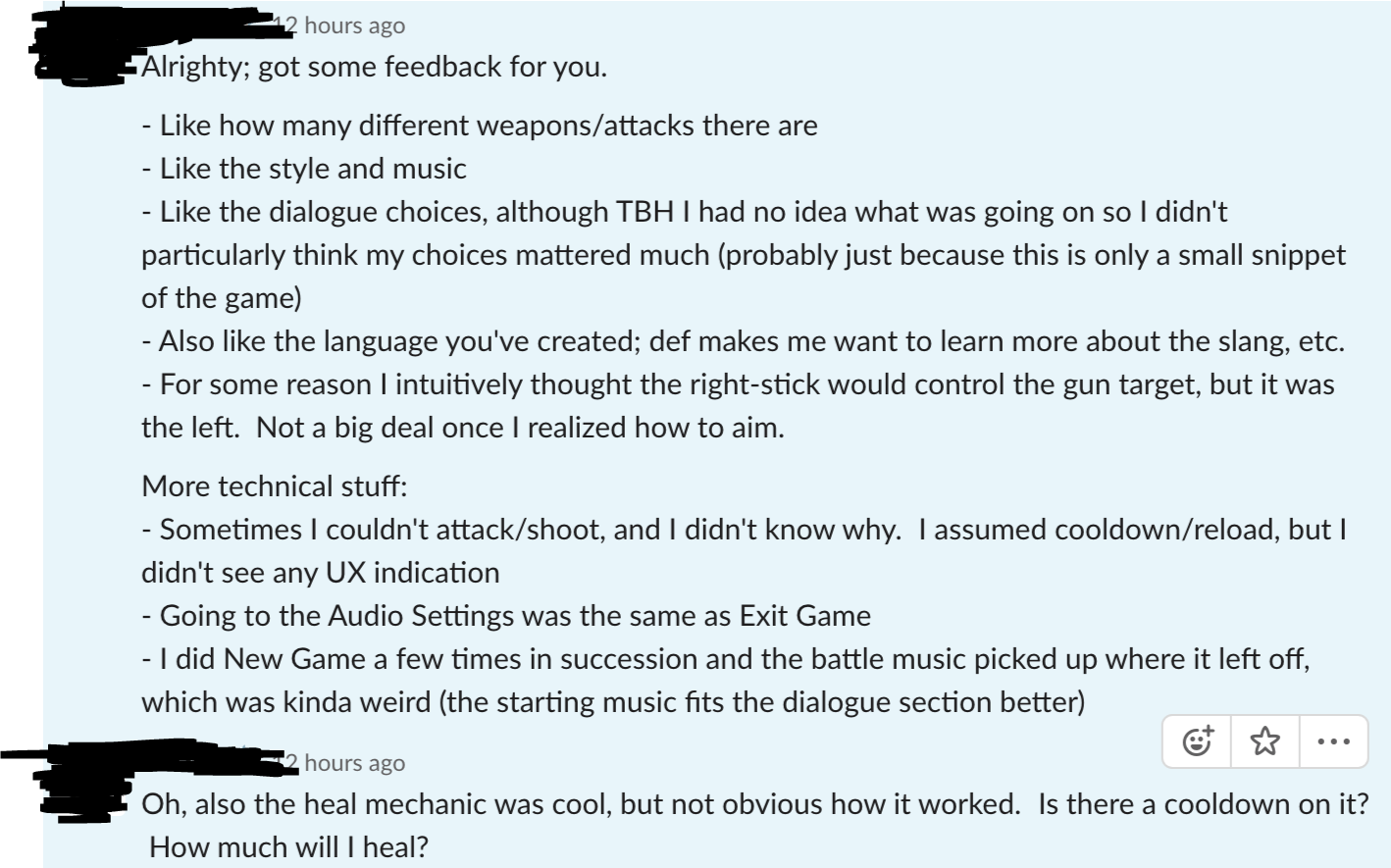